Llanelli Angling Association is a fly fishing club that controls the fishing rights on the Upper Lliedi Reservoir on the outskirts of the town of Llanelli and just a few short casts from the Millenium Coastal path. The lake is fondly called by its members as Swiss Valley and Top res. It is at 32 acres the largest water in the county of Carmarthenshire where the sport of fly fishing is practised....

The Association was founded in 1902 and is one of the oldest fishing clubs in the Principality . Rainbow trout are the species stocked for the membership and it is a great pleasure for all to fish in such tranquil and beautiful surroundings.

Members have fished for trout on this their club water since the clubs` inception.

Tight Lines and Smoking Reels to all who fish.

Llanelli AA was founded in 1902 and the club water has been the upper Lliedi Reservoir since its inception. The focus of the club has been on fly fishing for trout. 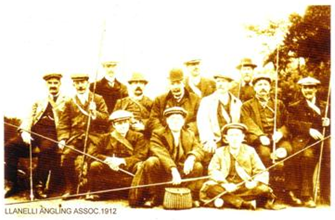 Early 1970 the Llanelli and District Water Board was taken over by the Welsh National Water Development Authority . Club permits were increased over a two year period from £12 to £120: this had a disastrous effect on club membership when it went from 90 members down to 24. The water authority could not continue the stocking policy and they wanted to close the fishery and they renamed it a wilderness fishery.

Llanelli Angling Association together with the Llanelli Borough Council took over the running of the reservoir and did so until the Llanelli Borough Council became the Carmarthenshire County Council. The club is now in the process of leasing the reservoir directly from Water Authority, and look forward to working in partnership to continue to provide fly-fishing in Carmarthenshire.

The fishery is now managed by Llanelli AA.

As a non profit making organisation all permit money is used for the stocking of fish and the upkeep of the reservoir.

The club membership has expanded from under 30 members in the 1970`s to the present membership of circa 60.

The club is affiliated to the Welsh Salmon and Trout Angling Association and Angling Trust and we have a number of both junior and senior Welsh internationals members of the club who have developed through the club activities.

The club has always practised an ` open policy` and encourages all, including junior and disabled anglers.